Why?
Because...
So lets check my sport background to clarify how I handled this running experience.
I started mountaineering in 1999.
Climbed lots of mountains in Turkey in all 4 seasons.
It was the beginning of my journey to the borders of my mind and body.
I was reading epic alpinism stories at those days.
One of the toppest alpinist of Himalayan eight thousanders was Jerzy Kukuczka.
Messner was the first alpinist to summitted all 14 ountains over 8000 meters.
But by writing foreword " you are not the second, you are great" to Kukuczka's book My Vertical World he also accepted that Kukuczka was the best.
After reading that he experienced 48 hours of hunger when he was child, the next day I tried it.
Result?
I was starving but also succeed.
The first time that i put climbing harness was the end of 2000.
It was 2004 that I took the second place at national bouldering competition and community got surprised.

How could this happen?
As i did all the other sports the key is focusing on technique.
Just watch Adam Ondra and Chris Sharma and you feel the difference of technique.

I have never been  a strong climber.
The days that I was training for about 5-6 hours and twice a day I  was not able to do pull up more than 2 with 26kg weight.
So  I don't need so much core training for running.

My relation with bicycle was falling, falling and falling.
I started bicycle touring in 2015.
I never ride more than 50 km and one day I decided to ride 163 km to visit my friend. Bandırma Çanakkale

Same summer we did 350 km Çanakkale-Izmir.bicycle tour.
Then after did the 165 km Iznik Lake tour

As I did on the other sports I started running from the technique and tried different routes, terrains , speed etc.

I started to search about training programs, athlete toughts etc.
After a calf injury turned back to running on My 2015.
I don't even have a smartphone to record my training so I arranged my training schedule to available times that I can borrow my girl friends phone to record my runs :))
04/10/2015 planned as typical Maçka Park day.
One of the gel left from my one and the only marathon expiration day was 07/10/2015 and took it with me to the park.
My aim was to lay and run a bit.
1:53:56 was my first hilly park half marathon time between the crowd. 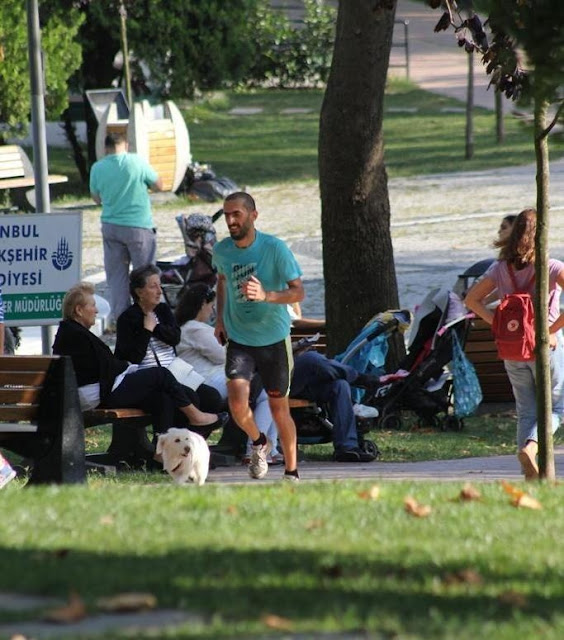 This was good i tought.I can do that again every weekend.
13/10/2015 i just ran.I did my PB with 1:34:39 and with exicement shared it on my instagram
A route from Sariyer to Besiktas. I called it Bosphorus Half Marathon.

29 was windy  and 30 was snowy and I slipped 2 times
Gastrocnemius was strained.
31 December we went to Macka Park to do some ski and snowboard.

While tv channel was recording us for the news we did some freestyle jumps and felt pain at my muscles and understood that the evening half was cancelled and also quit running for a time.

What i experinced
I used Saucony Triumph 11 at all 7 days and satisfied.
Weared a short except last snowy day
First 5 days I run with tshirt.
I used my neckwear everyday.
I took ferry to pass to Anatolian side which is best to try this kind of challenge

My route below.Just ran one of them in European side and the route was bad (sidewalks) 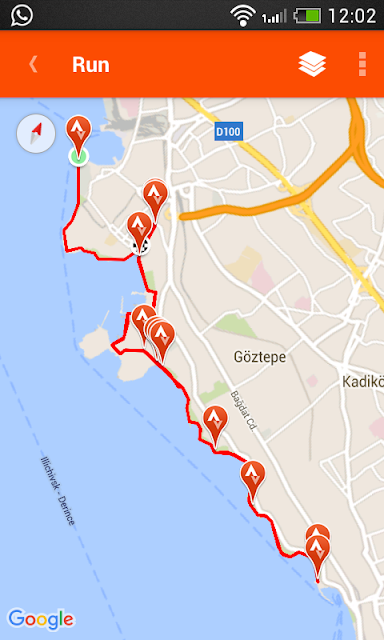 As soon as i finished i drink water, powerade and eat a croissant.
Did my streching at the 20 minutes ferry journey.When i arrived at Besiktas I ate salad, soup,pasta, vegetables
When I arrived home another stage was starting with my experienced yogini and multi-sport girlfriend Ekin whom is owner of  Yoga Kultur
One day running specific hatha and the other day yin for 1 hour with her was effective at my recovery period.
You can find 11 poses selected by us especially for runners. Yoga for Runners

Ice to the knees and leg elevation was a must.
Did tennis ball massage to feets.
I freezed 1,5 liter bottle and used it as a foam roller (invention :))
Went to bed after fruit salad and green tea.
I was very bad  at sleeping.
After i woke up I drank water with lemon.
It took one hour to reach the route to run so even I did  not like coffee I drank one with one croissant.
After running the second one in 1:40:00 I evaluate the challenge to run all halfs under this time.
I was alone and without music to make it more challenging.
Didn't eat or drink while running.

Advices:
Seperate the route in your mind.
Don't forget to warm up and cool down.
Strecth before and after.
Do yoga after the run.
Consume good foods and vary them.
Choose a route without car and human traffic.
Wear correct clothes and shoe.
Run at comfortable pace.
If your muscles, tendons and joints are ready it will be adventure.
Don't be afraid give it a try.


Last words
"I can accept failure, everyone fails at something. But i can't accept not trying." Michael Jordan
"The only place success comes before work is in the dictionary" Vince Lombardi
" Don't talk about it just do it" English proverb
Etiketler: 21k 7 Half Marathon 7x13.1 BacktoBack Half Half Marathon Half Marathon Turkey Istanbul Marathon Long Distance Running Maçka Park Running Istanbul Running Turkey 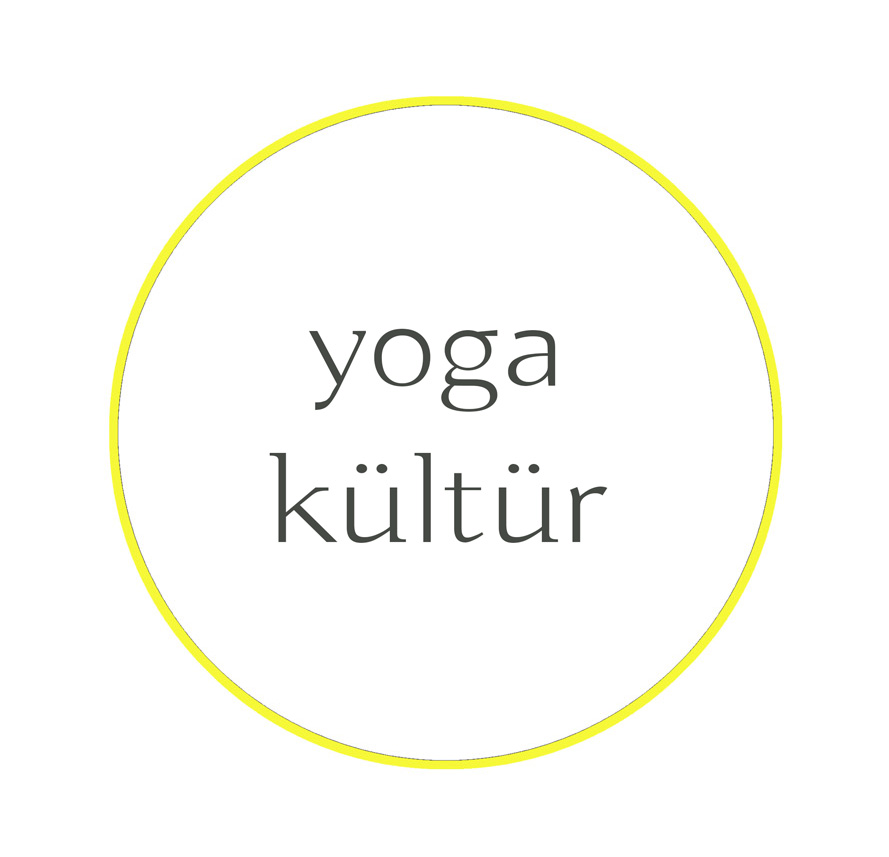